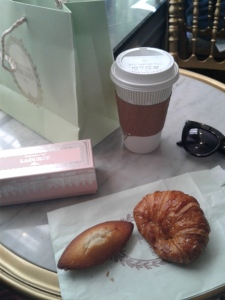 Breakfast at Ladurée, round the corner from the Frick

The maid’s momentary could be a genre painter’s capture, except of course for extraordinary strategy, the white satin of the modeled face, but there is something in the lady’s eye triangle which seems impossible to capture.

“Girl Interrupted at Her Music”, Vermeer, ’59

Very strange to say but the laughing woman and soldier though aerated like porous rock in technique – Rembrandt – is doubtless V. The strategy could not be more different from mistress maid. It was the pose of the soldier, the amount of face he showed, which instantly responded to my doubt. The woman’s expression also – again that bizarre quality of being in progress, really unique as far as I can tell to him – but it was the soldier really. No one occludes so naturally. He is alone.

French woman says “This one has a more mean face” compared to Cromwell.