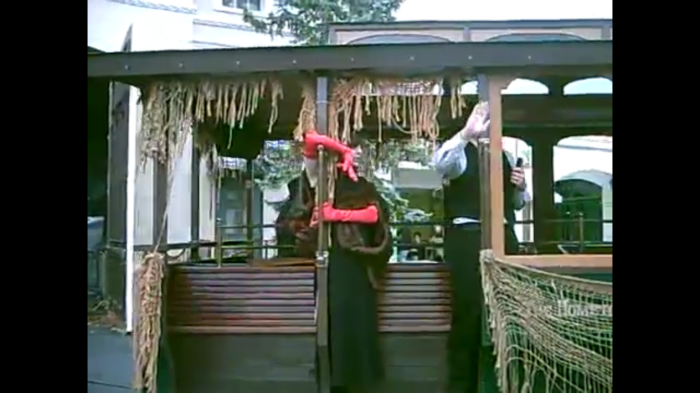 I had my first job the autumn I was seventeen. A friend got me in. I played a monster at a theme park’s Halloween event.

Through the staff entrance, under the roller coaster: in the morning, before the park opened, the coaster cars ran empty, stampeding down to your head and up again. Later a human scream would swing over you: a group scream, female in composite, down and up.

My little team worked in Hollywood town. One day my colleague tipped facefirst off a fence and smashed his wrist, leaving my boss and me alone together for the rest of the season. Decades apart, fiddling and mostly silent. My boss was friendly with the freaks. They would stroll round for a visit and he would cheer up. The freaks were really freaks, an independent business of two which the company would rehire each fall – the big man put pins into the little one’s ribs or something like that. They leaned in our trailer and rode swinging their ankles on the end of our parade trolley. Big man meat-armed, a backcountry goatee; little man white like a pitbull, wore a glass eye.

Park events are subcontracted to theatrical companies: this company specialized in disaster recreation for emergency professionals and also fright amusements. It called its fright actors the Creature Crew. The company owner rode white-bearded and weed-smiling in a golf cart between towns; my boss anxiously shook his hand. “Put something on her,” said the owner when the cold hit. My boss hooked a fur over me.

The gate to Hollywood town burbled dry ice at an extraordinary volume. Standing with my boss in the fat clouds – dry ice smells of maple syrup. It ground up our throats and lowered our voices. One of us instituted a policy that we would limit our exposure to a certain number of minutes: my boss set his watch. We stood beside the spookhouse, whose outer walls shook with the noise inside.

“What are you?” asked visitors angrily.

“Action!” said my boss, smacking his clapperboard. I waved.

At the start, I came to work wearing my school clothes. Eventually I began to wear my black dress to and from the park. This gave me time enough to nap on the couch in the trailer before putting on my makeup. My makeup did not take long: I painted my face white with purple eye cavities and a Clara Bow mouth. “Smooth it out,” said my boss. “Huh?” I said. My boss took a sponge and touched cold makeup onto my cheek. He knit his brow.

We took our breaks in a frigid shed. Its shelves were lined with Daffy Duck character heads. We sat kitty-corner to one another on folding chairs. My boss rose and bent to look at the beetle at the center of the floor, on its back and winding its black legs. My boss crouched and carefully turned the beetle over. He returned to his chair and sat, lacing his hands.