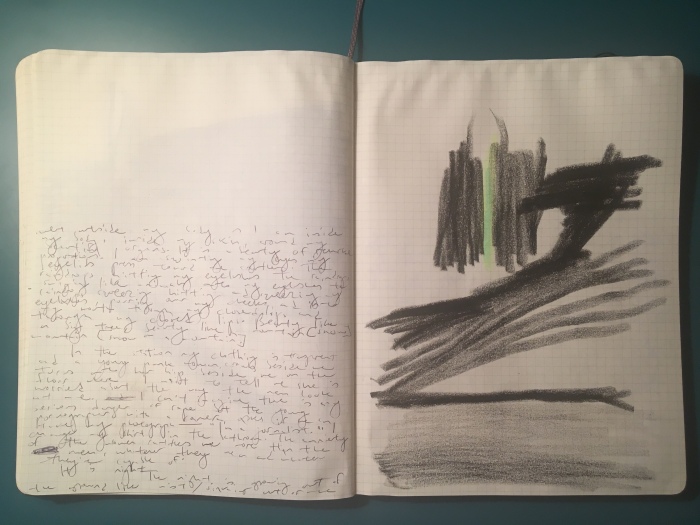 I leave the old city in the rain. On the bridge over the river the rain stands suddenly up, palms flat to the tabletop, chair banging down, and the brown river vibrates entirely—full-body gooseflesh rises across it. I am pulling my suitcases over the bridge and I am as wet on the surface of my body, the limits of my body, as I am inside my body, inside my skin. The raindrops hitting and squeezing my eyelashes; water pouring over my cheeks and into my mouth through my closed lips. Beauty like a big tree or snow on a mountain.

In the station my clothing is wetted to transparency and a young punk woman turns onto her hip beside me where we sit on the floor and she tells me she is worried about the way the men look at me. I can’t imagine there is any serious danger of rape but the twenty-something pornographer with a camera asks if he can take my photograph—“I’m a journalist.” I change my shirt in the bathroom. The anxiety of the women rattles me more than the men, whatever the men mean and whatever they are capable of.

I am alone on the bus to the airport and by this time the night soaks into the air out of the ground. The bus slopes over the highways which are mostly empty. The land and sky go black then glow green in the desolation of airportplace, a zone for miles around every airport. Waiting in the bus in the parking lot at the station I cry effortless tears, like water out of turf when the boot presses it. Without tension or real sadness. It is only that I am very tired. On the highway the black and the green like the orange of fireplace pokers—my eyes pointed into it and being inside it, surrounded by it—it gives me the old frisson, the frisson of the prairie. Not the equilibrium of water and water but a fearful depth-on-field, a stone made into a missile, a running fox, the spot of a flashlight. Naturally, a joyful frisson. And alongside this rolling-of-the-skin, beside it like the next thing, I desire warmth, loving comfort, to be childed by a body much bigger than mine.

The airport, and the little airport shuttle with other passengers in the dim, and then the airport hotel, an orange upright stone. Its silent chapel, its glacier-plain grounds in the black.

Orange tree rain statue!
In my dome of enchantment
New new new! Link in bio! Now you can read my poem about Set and #osiris on my site’s Read Online tab. This poem was originally published in @salthilljournal 🧂 #egyptianmythology
Now see this cactus moon
Sweet lemons from sweet J! 💗 🍋
Today marks the descent of the balloons which have been hanging in a tree since Nowruz 2021
Loading Comments...
%d bloggers like this: