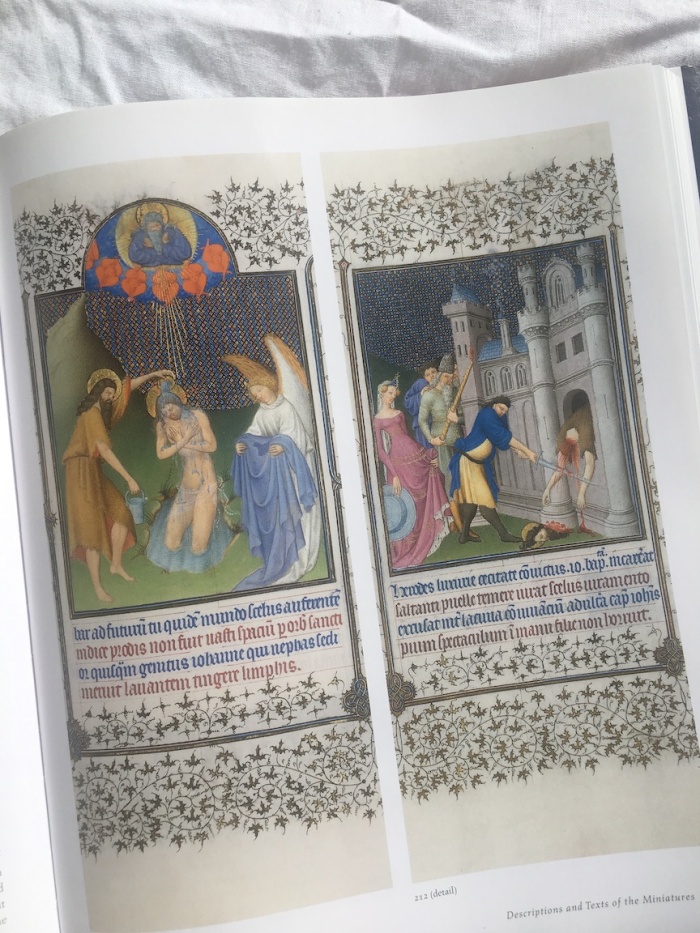 Image: a page from The Art of Illumination: The Limbourg Brothers and the Belles Heures of Jean de France, Duc de Berry, ed. Timothy B. Husbands. The images I discuss here come from fols. 211 and 212.

Squinting bares my teeth. My head is tracking the clouds: I am on the balcony in the afternoon in May and where it is clear the sky is blue as rubber. Clouds cover the sun and so I am cold.

I don’t understand the Limbourg Brothers. The colors of Belles Heures seem distinct to the point of isolation—like a wide blue sky on plains of snow, and people in red jackets and blue hats on the snow in the sun, regarded from below or watched from high above. The bewildering experience of “this shape is only these elements which are seen and easily handled, and that’s all entirely.” You think some evasive shape must be inside the shape of the color, but the shape of the color is excessively limited. A world in which the shelves at an office store comprise all sensibility.

In fact a dominant strategy of the Limbourgs is to grade colors from a pure hue into a black of hatch-marks, and a darker shade beneath. Christ, bare as a shaved bough, stands in a little rush-lipped pit symbolizing a lake. John drops blue strings of water over him: the water stripes Christ’s head and face and clavicle and lifting hands, then crowds his crossed forearms and falls in paint-straight lines toward his long thighs and active knees.

The sky is a rope of gold and red and blue, and in reproduction the gold looks black—gold in reproduction always looks black. At the summit of the scene, a half-circle of God’s-sky, and God too, collared by red seraphim, really the orange of sun-dried tomatoes but red in effect—seraphim, lucky square knots who circle against the sky like planets on a Swiss clock. Blue sky brushed with clouds, and fine blades of light from God, down to the baptized man.

John in his furry coat, curved at the knee in motion rather than grace, robin-blue bucket in his right hand. An angel with wings colored like thick German bread has Christ’s robe ready: blue as chalky pills, draped from the angel’s two hands in the shaded half-moons that frocks with triangular hems fall in. The open neck of the robe shows cool inside.

John flops on his breast out of the wall of the palace in the next image, neck spraying blood onto the blade of the sword. The blood goes with more pressure than water, and drives angular toward the foot of the pillar. The head is on the ground, hair rolling. On this page—if the head were on the body and the body were standing, this John would look with some symmetry into the face of John baptizing.

The last of the cloud network has passed over, and the sky is open and the sun is hot as summer. Sun like a hot shower.