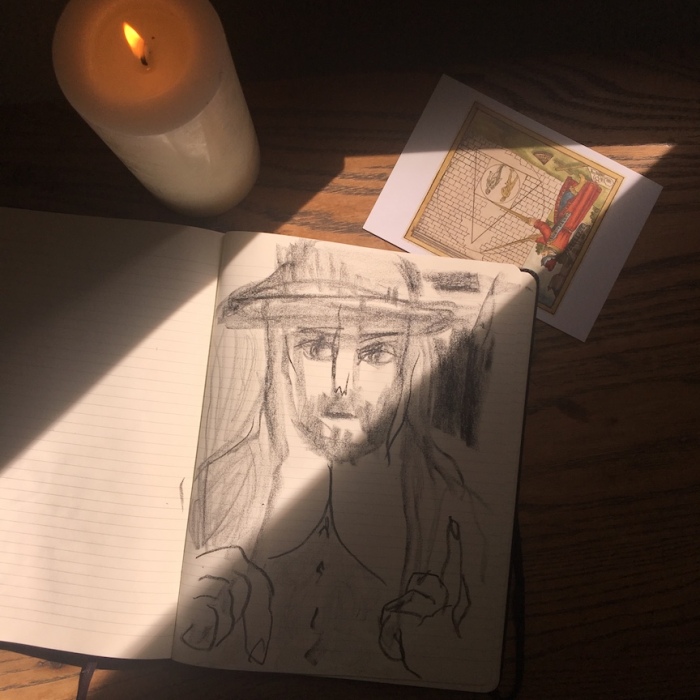 I have some ghost stories to tell you until Halloween. This one is about colonial America.

John made the arrangement in quiet and not long ago. Christmas came like his wife’s cold toes in the night and with irritation he moved from it. All the winter passed under the shape of his project.

In February the men sat in council. They determined the hour of Susannah’s hanging and chose a burial place. Matthew wanted Susannah’s head shorn. Matthew should not have been admitted to the room. There were women minding the door outside and the women let Matthew in, because they were virgins and didn’t know about him. Twice Matthew took the conversation; the others did not respond. Matthew mistook them and he made a third attempt to speak. Hope-in-Christ stood (smartly, because he was embarrassed to do it) and drew Matthew away. In the twilight on the yard the two men must have felt that they were in a room with a closed door, but they were plainly seen through the window. John watched. Hope grew exercised, and actually reddened above his blonde beard. His mouth was moving. Matthew’s posture wrinkled.

Matthew worked indoors on the day of the hanging. Susannah was executed decently and buried apart. Consolation at church: don’t pray for mortal sinners. They are nearer Christ’s heart than you can measure. Rely on His mercy and mind your own insufficiency in this matter.

John had made his arrangement in November. He said to the men that he was going out alone to pray and that he would be gone until night. They looked at him but with discipline they looked away. This was the fear of the man alone. They felt it as keenly for one another as for themselves, and for one another’s sake they dared to allow it. Heretics would plug the silence with priests. Young and strong in Massachusetts, they labored to be still, and to hear like Abraham.

John went out into the bare woods alone in November. John was not frightened by solitude. He was different to his neighbors. John regarded the immediate world as an opened door. Beyond the door there was a land whose inhabitants were amiable and inquisitive, lifting their noses. They were molded for service. John walked a long way to the woods, to a clearing where he would not be seen. He made a sign on the earth. The air was cold and dry, and the littlest, highest branches of the trees seemed to make a smoke with one another. John put his hand into the world of God as into a warm pool.

John offered Susannah because she was unpopular and her husband was dead and so were her daughters. John was patient. After Epiphany he went to William, his friend, and told a story. William put his elbows on the table and he put his face in his hands. When William opened his hands a long time later his palms were red and wet as if he’d sweated around the handle of an axe.

John’s wife Deborah did not know John’s part in the trial and hanging. The evening of the execution she said that the house smelled of mice. Deborah suffered from a shortness of breath and when she was under sentimental strain she became outlandishly afraid that she was bound for an attack. She said that the house smelled of mice but she said it with fear and not accusation, so John supposed that she was only upset at the witch and the sight of the hanging, and not that she had guessed his responsibility.

Deborah kept on about the mice. John woke one night to see her in her chair. Dim, soft, high. He heard a whispering. He thought she was praying and then understood that she was trying to breathe. Half-asleep the thought came to him of his mother beside his bed when he was a boy. He slept and the thought came to him of Susannah hanging. The shape of her body was a comfort, like the shape of his mother. The thought in his head was a snowpea in its green case.

When some days had passed after the execution, John made a request. He tested his servants like a floor. Carrying wood home in the evening he stepped lightly and then he jogged. John threw the wood down and ran along the bare strip of land at the end of the town. The wood passing from his hands was like the dropping of chains. John ran faster than a man and faster than a buck. His heart was lazy as one asleep. When he came to rest he looked back at the town, far. John was glad and he ran home again.

Deborah sickened. John tried to keep the house for two but soon it exhausted him. William and Sarah visited. Sarah brought a meal: it stank. John could not eat it and did not try. William ate and spoke at the same time, and grew merrier as he spoke. He drew his eyes between John’s plate and John’s face like a pulley. Sarah smiled queerly at the tabletop. William leaned toward Sarah and bit by bit he desired an anecdote out of her. She had to be cajoled at every pause.

When William rose at the end of the night he tangled the feet of his chair in a linen on the floor. The linen was on the floor because it was soiled. William nearly fell from the chair, and looking right and left at the floor as he tried to stand he was like a silly man in a sinking rowboat. Sarah rose with two hands on her husband’s forearm. She glanced at John as she stood. Her short fierce eyelashes pulled her eyes back as soon as they landed.

The women talked apart and William waited with John outside the door in the black night. William said that Deborah might stay at his home where there were women to nurse her until she was well, and meanwhile John might take some ease. Sarah had her arms around Deborah’s neck and their faces were so near that John thought they would kiss like lovers. John said that Deborah would breathe better when the snow was dried up.

Mid-March John thought he would go out. He meant to run along the edge of town as he had done before but he was distracted by Isaac’s brown horse, straying. The horse’s neck was long like a stocking and its mouth went after its feet, along the graying snow. John thought about the horse and walked as he thought. He walked at a shallow angle through the woods. His ideas seemed to extend beyond his stride, and even marveling at the slowness of his rising and dropping leg he outlasted his own step. John was surprised when he came to the river. A running man could not have arrived to that spot so swiftly.

There was a man at the water, bending. The sight sickened John with the special nausea of bewilderment—thus when he was a boy and his eldest brother’s arm broke at the shoulder, weird as a cured hock, hanging. The pose of the man at the water made a shape which John could not understand. In another moment the man stood. It was brown Solomon, the savage. He had been washing his hands.

Solomon looked at John before speaking. Solomon dried his hands with a cloth from his breast, folded the cloth and returned it to his bosom. At last he called out. John, are you well, he said. John turned toward the deeper forest. John, you are not well, said the savage.

In the night in the forest John looked at the whorls of a stump. John was weeping. He took a breath and his tears chuckled in his neck like a chicken. From the spaces in the stump came a long face, bearded and opened-mouthed, sorrowing. The face was like a wet skirt. It flapped and said Ohhh.

John tore himself away, but only in a half-circle, pivoting. The moon was out and he could see well enough. He undressed. He wept like a child, shoulders hopping. There was something like clothing in the boughs of a wild raisin. “I don’t wish to,” said John as he drew the garments on. “I don’t wish to.” The material was wet and cold. He fumbled at the ties of the piece for his face. Clumsy, he knotted his own hair into its thongs. The matter was stuffy at his nose.

John squatted in pain. At length he stood although the pain had not lessened. He put his foot forward, with such difficulty and so heavily that it sounded like a great branch falling. He wobbled there, splay-legged, until he caused himself to step his other foot beside it. In this way he went on. His walk made a terrific noise, but he was otherwise hushed. You would not have known it was a man if you had heard that slow struggle. Maybe you would have thought it was a dog pulling a doe’s thigh.